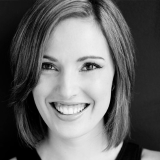 Jaimi started dancing at the age of 5 and singing lessons at the age of 12 with Kirri Adams. She then went on to complete an Advanced Diploma in Musical Theatre and Commercial Dance at DLDC by the age of 17.

Teaching for many years in Brisbane, Sydney and now back on the Gold Coast, Jaimi has gained a wide range of experience working with all skill levels. Professionally she has worked amongst some of the best in the business dancing back up for Kelly Rowland, Guy Sebastian and appearing in Brian McFadden’s film clip ‘Just Say So’.

Jaimi has also assisted Project Moda on ‘SYTYCD’ many times creating duos for the finalists! She has performed all over Queensland in children’s shows such as Fifi and Bumble, Koala Brothers, Scooby Doo, Barbie, Looney Toons, Bananas in Pyjamas and many more. She has worked alongside Special Olympics choreographing and performing for and with children with intellectual disabilities.

Jaimi was a regular back up vocalist on X Factor 2010, as well as recording most of the tracks that you would of heard the ‘Top 12’ sing along to. She has also recorded backing vocals for Melanie Brown (Scary Spice – Spice Girls!) and performed with INXS as a backing vocalist.

During the last 5 years Jaimi has been the driving force of Itsy Bitsy Ballerinas on the Gold Coast as well as the Talent Agent for Epic Talent Management Queensland.

Jaimi’s passion lies in working behind the scenes; teaching and helping students achieve their very best in whatever they dream to do.

Jaimi holds her TAE 40110 and is the Lead Performing Arts Trainer and Assessor at TOC Australia’s Gold Coast Campus.